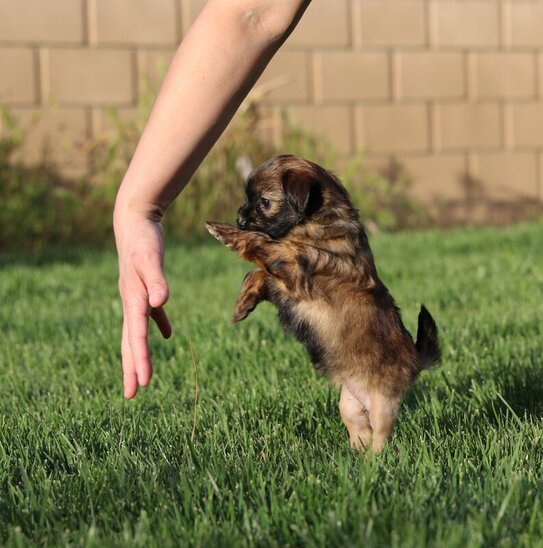 So what is a Löwchen?  The Löwchen is a companion dog bred for centuries for the sole purpose of giving love and hoping to get love in return. If he saw a squirrel he might run after it but wouldn’t know what to do if he caught it! If he confronted a burglar, he’d bark and then, with a Löwchen grin, lick his hand and lend assistance. The Löwchen is convinced that life is a bowl of liver treats. Perhaps this happy attitude comes from being allowed for hundreds of years to sleep on the beds of princesses as a combination hot water bottle and flea catcher.

But don’t be mistaken, this dog may look like a fluff but he is fearless, a true little lion! He will stand up to a German Shepherd and bark down a Great Dane. He is smart, trainable, resourceful and very adaptable. He will gladly sleep in a crate but he would prefer to sleep on your bed. He rarely meets a stranger, loves children, other animals, long walks, cuddle time, toys and car rides. He is alert to suspicious noise and should be trained as a puppy not to bark excessively. He loves exercise wherever he finds it, in a big backyard or on regular walks and trips to the park. He loves obedience and excels in agility. He loves a challenge to his intelligence as well as his stamina. His joy in life shows in the sparkle in his eye, the bounce in his gait and the wave of a gaily-carried tail. He is non-shedding, hypoallergenic, relatively free from genetic disease and should lead a long, active, loving life well into his golden years.

His coat is generally easy to care for. He loves to be brushed and pampered several times a week and groomed every two months by a professional groomer. If he is a show dog, he must be shown in the Lion Trim. Otherwise he looks adorable in a simple puppy trim. Because of the distinctive Lion Trim, we are able to trace his existence back to the 1400s through works of art. However, there are several theories regarding his early history. One thing we do know for sure, since the Löwchen was the dog of royalty; the breed was almost destroyed in every major European conflict. How lucky we are that a few dedicated breeders over the years considered it a labor of love to save this wonderful breed from extinction. And the story continues…

History of the Lowchen

The Löwchen as a breed has a long and somewhat controversial history. We know from works of art depicting images of small dogs in a very distinctive lion trim that the breed dates to the 16th century. The breed is depicted throughout the centuries in paintings, block prints, line drawings and tapestries from around the world.
The controversy arises as to the exact origin of the breed. There are several theories on this debate, depending on who is doing the talking. One theory holds that the breed originated in the area of Northern Europe now known as Germany, France and Belgium. In this area the Löwchen is thought to be tied to the breeds that were the forerunner of the modern day poodle, and quite possibly as a factor in the development of the Toy Poodle.
Another line of thinking holds that the Löwchen originated in the Mediterranean region and are directly related to the Bichon type breeds of that area. The Löwchen has also been set in Russia and even the region that is now Tibet. Whatever ones view of the origin of the Löwchen, we know that the breed has survived through the great upheavals of hundreds of years to emerge very nearly as they appear in the art that is the documentation of their history.
The Löwchen has been the resident of all manner of households through the ages, from castles to the most ordinary farmyards and cottages. Aside from their primary function as a companion they were most likely great varmint hunters and fierce little guards of beloved hearth and home.
Folk tales surround the Löwchen, bringing a charming side to their history. It is said that the Löwchen was a favorite of castle ladies as a sort of living hot water bottle. The trimmed area would go under the covers for warmth and the furry part would attract the fleas out of the beds and away from the people. Another legend associated with the breed was that if a knight died in battle a lion was carved at the foot of his tomb, if he died at home in bed, a Löwchen was carved on his tomb.
The story of Bijou, while basically true has also added to the charm of the breed. In the late 1700’s, Bijou, a parti-colored Löwchen lived in a castle in Weilburg, Germany on the Lahn River. The story goes that, Bijou, through extreme loyalty to his beloved master, jumped from a window 60 feet above the river rather than be left behind when his master went off on a hunt. The ending of the story is the stuff of legend. One ending says that Bijou survived the jump and was rewarded by riding to the hunt on his master’s saddle, the other that the jump ended in disaster. Whichever ending is true, Bijou became famous. His life size portrait completed in 1787 still hangs in the baroness’s bedroom in Weilburg Castle. Bijou’s devotion, loyalty and fearlessness are very much evident in the Löwchen of today.
Little is written about the Löwchen during the early years. The first record of a breeder and fancier was a Dr. Walthier in the early 1800’s in Germany. The first know Löwchen standard was published in a book by Count Henry de Bylart, Dogs of All Nations. Maximillian de Conick was the first documented modern breeder and exhibitor of Löwchen. In 1897 he sold Madame Madelaine Bennert her first Löwchen. Madame Bennert would become recognized world wide for her efforts to save the rapidly disappearing breed.
​If interested in the history of The Lowchen Club of America, click here